On my last visit to New Orleans I stopped into Cochon Restaurant, which I had visited a few trips prior and absolutely loved, especially since back then, I was invited back into the kitchen to take some pictures! (Here is the original post, followed by one of my favorite pics from that visit):

There were a few dishes that I wished I had tried on my previous dining experience, so I made another go at it. On a side note, Chefs Donald Link and Stephen Stryjewski also recently opened a second Cochon Restaurant in Lafayette, Louisiana.

is one of my absolute favorites (My Review):

Here are the dishes that I had a second chance at sampling, well worth the wait! All of these are actually featured in his cookbook as well!

Perfectly fried chicken livers on toast points, slathered with housemade Pepper Jelly and finished with a salad of mint leaves and sweet onions.

Cooked in the restaurants wood burning oven, these baked oysters, topped with a compound butter made with Vietnamese Chili sauce among other inredients, were easily my favorite of the appetizers. The plump Louisiana Oysters with the spicy, garlicky butter sauce were absolutely addicting. Definitely one of my new favorite Louisiana Oyster dishes, of which I have many.

I couldn’t resist trying Donald Link’s Boudin, as I was on a bit of a Louisiana Charcuterie hunt on this particular trip. Fried Boudin Balls with pickled peppers and housemade Abita Beer Whole Grain Mustard:

Definitely a great tasting Boudin! I think they’re using chicken liver, instead of the traditional pork. There is also some poblano pepper in the mix:

Donald Link has a great web show called Taste of Place. Here is his show about Boudin:

Here is my Boudin recipe:

Lastly dessert, Blueberry Buckle with…get this…Hog Cracklin’ Streusel topping! There has to be some kind of award for most creative way to incorporate pork into a dessert, with delicious results!

Of course, I will end this post with a picture of the restaurants woodpile, which is starting to become my signature on the sister site to this one American Gourmand.

arrived last Thursday, and I was like a kid opening his first gift on Christmas morning, shuffling for something to open the box with, flinging aside the bubble wrap to stare into a beautifully photographed crock of Gumbo. The title is in big bold white letters REAL CAJUN, as if to say, ok, enough with the blackening already, enough with the notion that everything Cajun is super spicy, enough with the Bourbon Chicken in the food courts; let’s get down to the nitty gritty. Real Cajun, rustic, simple, home cooked meals.

It seems only fitting that the Chef owner of Cochon, and Cochon Butcher (no, I’m not forgetting Herbsaint), would have homemade Bacon as the first recipe in his cookbook, with the first “chapter” bearing the title La Vie Cochon, with recipes including Tasso, Boudin, Pork Belly Cracklins, and more. The most mouthwatering recipe in this chapter, in my humble opinion, is Smothered Pork Roast over Rice, a simple recipe based on his Granny’s preparation, with a photo so beautiful that I swear you will try to lick the wooden spoon before the sauce drips back into the pot.

I have to admit that I was a little disappointed that he didn’t include more Charcuterie than he did, but I totally understand why he didn’t, keeping it practical for the home cook I guess. (I have my fingers crossed for a follow up book surrounding Louisiana Charcuterie, or a Cochon cookbook.) Don’t get me wrong though, the Charcuterie recipes that are included, Bacon, Boudin, Tasso, Deer Sausage, etc.. are top notch, I can’t wait to try Chef Link’s Boudin recipe, the photo is outstanding as are all of the photos in this book all by Chris Granger. I was looking for Chef Link’s Andouille, Hog’s Head Cheese, and Creole Mustard, but the recipes that filled these spaces totally made up for it and more.

The book’s recipes are wonderful in their simplicity (this is not a restaurant cookbook, although some of the dishes from his restaurants appear) with beautiful photographs that make me long to be in the stifling heat of Louisiana everytime I look at them. Some of the photographs from the book are hanging on the walls of Chef Link’s private dining facility Calcasieu, which is next store and upstairs from Cochon Butcher.

Real Cajun is mostly cookbook and part memoir, which all builds wonderfully around the recipes, just the kind of cookbook that I love, and reminiscent of another favorite of mine, Marcelle Bienvenu’s Who’s Your Mama, Are You Catholic, and Can You Make A Roux?

What comes through in both books is a love of Louisiana, real Cajun cuisine, family, and tradition.

This book is loaded with great recipes, I’ve tried out a few of them now, all were absolutely outstanding. Including Catfish Fried in Bacon Fat. The bacon fat adds an incredible richness to the crisp and moist catfish without taking over the flavor. I also made my own Tartar sauce as an accompaniment with crumbled Bacon added to it; what the hell right, the cholesterol meter is already broken. This is probably the best Catfish that I’ve made:

I also made the Chicken & Dumplings, a lot of great technique in this recipe, the best I thought was putting the pan into a 450 degree F oven to finish the dumplings. The stew is very similar to my recent Chicken Fricassee recipe, but the real magic happens when the dumpling batter is added and the whole pan is popped into the 450 oven. By the way, I made this for my wife and my Mom & Dad last night and they said the dumplings reminded them of Thanksgiving Stuffing, I agree. Awesome flavor with the addition of dried Oregano and raw minced onion.

I also used the Buckle recipe, but used Blueberries as they were the best fruit that I could find, his is made with fresh Peaches which aren’t in season right now. The Blueberry Buckle was dessert last night with good strong French Market Coffee, following the Chicken & Dumplings.

All in all, I haven’t been this inspired by a Louisiana cookbook since first reading the year 2000 publication of Commander’s Kitchen

by Ti Adelaide Martin and the late great Jamie Shannon.

I don’t recommend just anything, but I really think that this a great book, loaded with not only great recipes, but stories to go with each one. My copy is already getting a little worn, the page with the buckle recipe has some dried egg white on it, the back cover has a sticky substance from my kitchen counter. All signs of a good cookbook I guess.

Be sure and check out my ever growing Index of Creole & Cajun Recipes which links to all of the recipe featured on this site!

Also take a look at my Bibliography of Creole & Cajun Cookbooks! 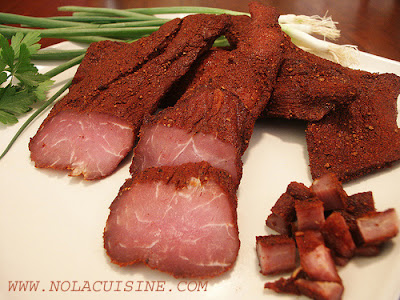 Tasso (TAH-so) is a smoked seasoning meat used to flavor dishes like Gumbo, Jambalaya, and Red Beans & Rice. Tasso used to be made from the trim after an Acadian Hog Boucherie, thin strips, heavily seasoned, dried, then smoked for hours. These days however, most of the Tasso that is available is a little more fancy, more of a ham than the style of the old days, mine is somewhere in between. I always find it amazing how ingredients and recipes, that basically came from scrap and the poorest times evolve into Gourmet, I love it. Tasso will keep in the freezer and is pretty easy to make, but you have to do a little planning.
A few Tips:
After seasoning it, I recommend keeping it in the fridge, at least 3 days to let it cure, look at how nice and pink the center is.
Take it easy on the Cayenne when making your seasoning blend, start off with a small amount, then add to your taste, the amount here is moderate. It should have some heat, but I don’t like losing control of the heat in a dish I’m cooking because my Tasso was too hot, so I cut it back a little, for the same reason that you don’t salt stocks.
Here is my recipe for Tasso. I used a Boneless Pork Roast cut into about 4-5 inch long, 1/2 to 1 inch thick slices. This is seasoning for about 5 lbs of pork:

Mix the seasoning together well. Rub the seasoning into the meat, you want a lot on there, call it 1/8 inch, use it all. Place on a plate or tray, cover and refrigerate 3 days.

Before smoking put the Tasso on an elevated rack so that air can circulate around it, then put a fan on it for about 2 hours to dry it out. I also don’t use a water pan when smoking Tasso, this is something that I actually want to dry out during the smoking process.

I hot smoked this batch in an inexpensive upright barrel smoker using charcoal as the heat source (heated with a chimney starter, no lighter fluid or matchlight coals please.) I used Pecan chips that were soaked in water for 1 hour for the smoke.
I smoked this a total of about 4 hours, the first 2 hours at about 150-160 degrees F. The second two hours at 180-190 degrees F.
The object is to get as much smoke into the meat, before cooking it all the way through. I brought the internal temperature of the meat to 150 degrees F in the last 2 hours of smoking.
When finished I again put the Tasso in front of a fan for about 1 hour. Refrigerate. When completely cold portion and store the Tasso in vacuum sealed packages. Freeze.