I’m proud to say that my photo made it on the cover of the new book The Louisiana Seafood Bible: Oysters

! I’m thrilled to be associated with such an informative book, the kind of cookbook I like, not just recipes, but loads of information as well.

The photo is from my post Drago’s Style Charbroiled Oysters Recipe. The art director of Pelican Publishing in Gretna saw my photo online and contacted me about possibly using it on the cover of an upcoming cookbook about Oysters. Being a Bona Fide Louisiana cookbook Junkie, I knew immediately that it was for the upcoming Oyster volume of The Louisiana Seafood Bible

series by Jerald & Glenda Horst, because I already own the other three volumes. 🙂

This is a great book, packed with information about the Louisiana Oyster, starting with the long history of the Louisiana Oyster industry, then continuing with every step of oyster production, from harvesting, to processing, to how to recognize quality.

The second half of the book is loaded with recipes from Louisiana home cooks as well from Chefs and restaurateurs, including the recipe for Drago’s Charbroiled Oysters. I haven’t had a chance to try out any of the recipes as of yet, but the ones that I’m looking forward to trying are Baked Oysters Bay Batiste which contains Mexican Chorizo and mushrooms, P&J’s Oyster Rockefeller Soup, Oyster Fricassee, Smoked Pork and Oyster Jambalaya, and Oyster Tasso Pasta. I will keep you posted on how they turn out!

This book is not just another addition to my extensive collection of Louisiana cookbooks, but the one that I’m the most proud of! Maybe one day I will have my own cookbook that will share the shelf with this one.

Here are some of my Oyster Recipes featured on this site:

By the way check out this Bibliography of Louisiana Cookbooks that I put together! Let me know if any of your favorites are missing!

Be sure and check out my ever growing Index of Creole & Cajun Recipes which provides links to all of the recipes featured at Nola Cuisine! 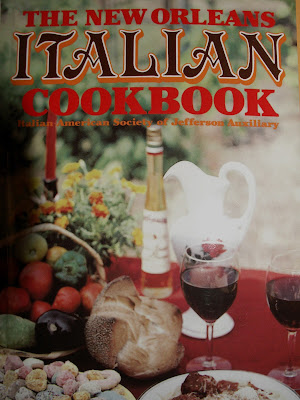 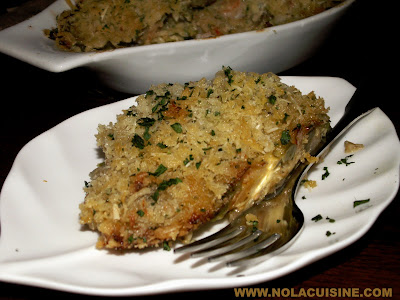 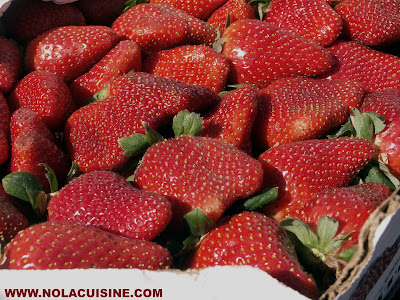 On our most recent trip to New Orleans in February, I stopped by the uptown Crescent City Farmer’s Market on a Tuesday morning. It felt wonderful to casually stroll the market with just a light jacket, basking in the sunlight, knowing that back in Michigan folks were still weathering the worst winter I can remember to date.

I love Farmer’s Markets and this winter has made me long for mornings like the one that I had in New Orleans. Alas, here in Michigan spring has finally sprung, and I can finally go check out some of our own local goodies without 4 layers of clothing and snow shoes. Here are some pics from my visit to the Crescent City Farmers Market in New Orleans.

Ponchatoula Strawberries, blood red straight to the center, and sweet as can be, probably the best strawberries I can remember. 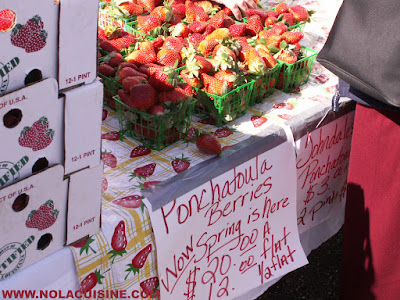 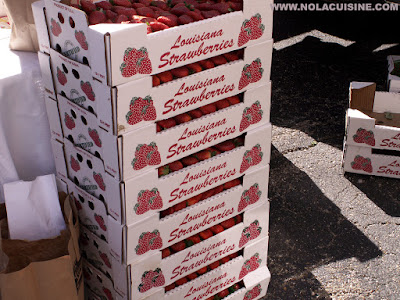 Nola Bean! was there with a menu of dishes created from some of the local ingredients. 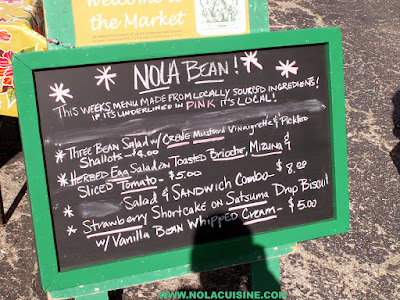 After getting a look at those delicious strawberries, I couldn’t pass up a chance at the Ponchatoula Strawberry Shortcake on a Satsuma drop biscuit with Vanilla Bean whipped cream. Wow, I can still taste it. It tasted even better than it sounds, pure heaven. 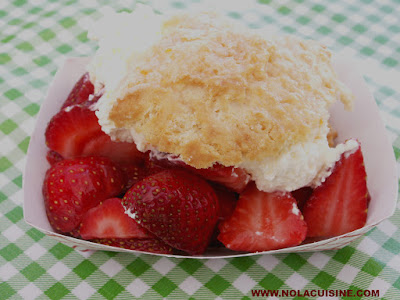 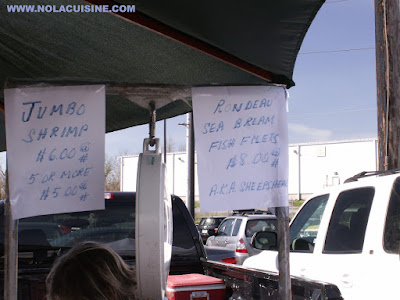 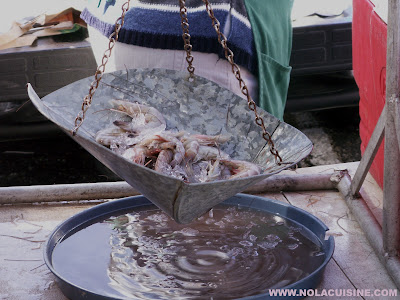 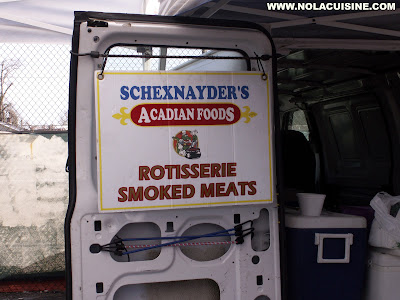 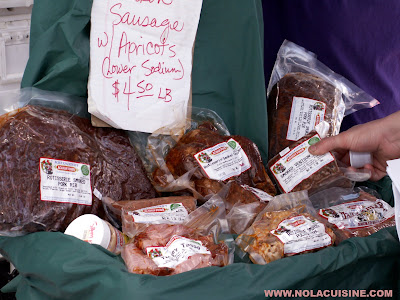 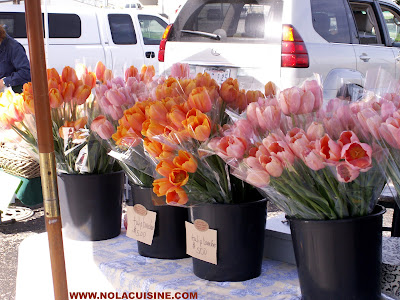 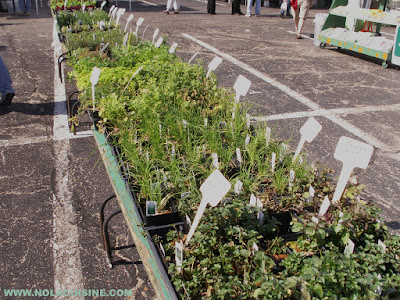 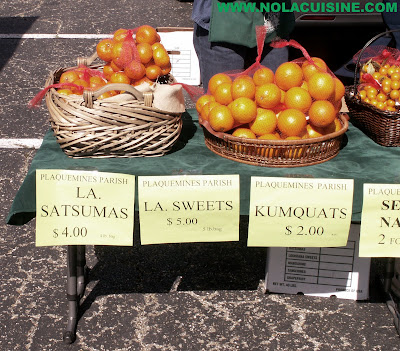 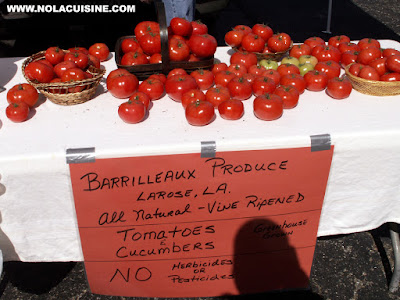 The Crescent City Farmers Market is open on Tuesday in Uptown New Orleans from 9 am to 1 pm River Road at Uptown Square. Directions

The Saturday market is located in Downtown New Orleans from 8 am to 12 noon on the corner of Magazine and Girod Street. Directions

I’m a collector of Creole & Cajun cookbooks, and I’ve been looking for a resonably priced copy of Marcelle Bienvenu’s
Who’s Your Mama, Are You Catholic, and Can You Make A Roux?

for sometime. There are some used copies out there, but good lord, they’re going for a pretty penny.

Good news! The book is back in print by Acadian House, repackaged into a nice hardcover, with all of the great photographs, recipes and memoirs contained in the original 1991 version, and going for $22.95.

I’m a person who wants more than just recipes when I buy a cookbook. Anyone can throw together some recipes in a book. I like some background, some history, in my cookbooks. I want to be taken away. Marcelle Bienvenu’s book doesn’t just give recipes, it tells a story, broken down into seasons, and the recipes, like the photographs, seem to capture a moment in time, which contributes to the story. Not to say that her recipes aren’t wonderful as well, because they are, I just appreciate the story behind them as much as the recipes. I really love the story of her first experience as a child, eating Soft-Shell crabs at a waterfront restaurant with her father. Being a new father, those kind of stories really put a smile on my face, and make me dream about sharing these kinds of moments with my little Anna. Good books evoke these kinds of emotions.

When I was reading this book last night, I experienced South Louisiana, and felt like part of the family. That is what good books do, and that is why this book is still in demand.

Marcelle Bienvenu is also the author of Stir the Pot: The History of Cajun Cuisine, and Cajun Cooking For Beginners, as well as co-authoring 4 of Emeril Lagasse’s books, including the best one, in my humble opinion: Louisiana Real & Rustic.
In addition, she also put together the Picayune’s Creole Cookbook (which I’ve referenced so many times on this site) and provided the side notes, which keep all of the fun historical recipe measurements and techniques in focus for the modern cook. Here is a link to her column at the Times-Picayune!

She also contributed to another of my absolute favorites, the Time-Life book American Cooking: Creole and Acadian which is out of print, and one of the best used books you can buy on Louisiana cooking.

…Needless to say, I’m a fan of her work, especially my new purchase. Highly recommended!