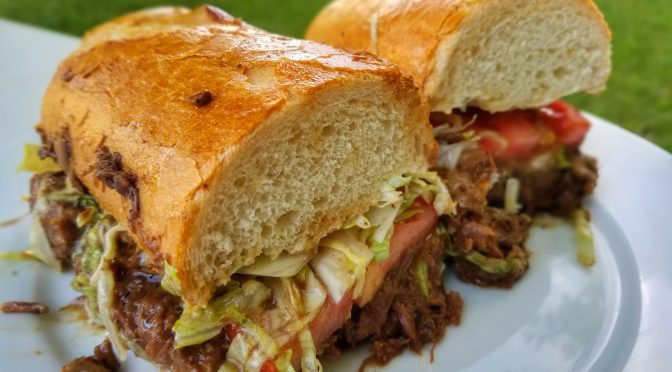 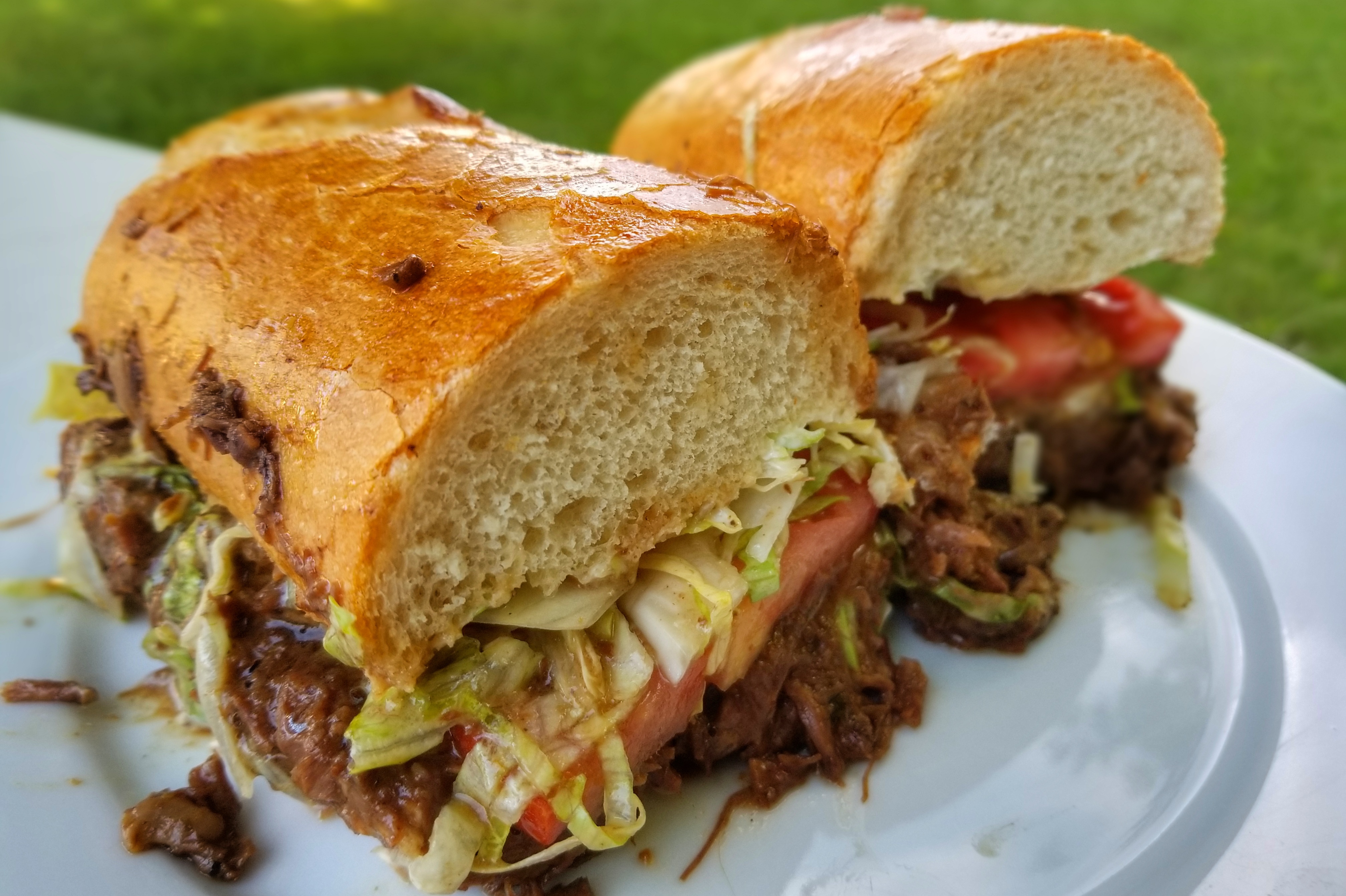 I’ve said it before and I’ll say it again…the first meal I go to off of the plane when I get to New Orleans is a sloppy Roast Beef Po Boy, it simply says “home” to me. I just recently saw a facebook southern foodie friend go into Parasol’s for a Roast Beef and received a comment along the lines of “why did you go to the gulf coast for Roast beef?”

The answer, dear reader, is that it is the quintessential Po Boy and sandwich of New Orleans. It’s a neighborhood specialty that folks grew up on, sitting in a dark tavern or pub with the odor of stale beer omnipresent, music moaning from a tinny jukebox or half assed speaker system. To be honest, and probably no secret to anyone with eyes, the place is probably not that clean. The conversation in the room could come from anyone… bums, judges, good time charlies, tourists, lawyers, construction workers or a group of high school kids in for a bite after school.

Everyone’s welcome and everyone is there.

Maybe the reason I make that meal my first one is to step into some real local color.

When done right it’s loaded with fall apart Roast Beef, waves of gravy made ever more creamy by generous slatherings of Mayonnaise, the first bite makes the French Bread and the sandwich collapse, leaving you elbow deep in gravy with fringes of shredded lettuce and pieces of tomato and pickle hanging from your wrist.

It seems these days there are two camps of Roast Beef Po Boy enthusiasts as these neighborhood joints are a dying breed. Parasol’s and Parkway. I’ll take them both, each a little different, each on the high side of what I think of as a Roast Beef Po Boy. Good bread, good gravy, fall apart meat, and good local color as company.

This is my humble nod to the Parkway Bakery & Tavern Roast Beef Po Boy, I’ve gathered a few secrets from this article:

I put my own spin on this recipe for those who aren’t close enough to grab one when the urge strikes. Be advised this is not highfalutin food. Don’t be shocked to see things like Kitchen Bouquet and Cream of Mushroom Soup, these are neighborhood recipes made by regular folks. Don’t judge as they don’t judge when you’re sliding off of the table from the gravy and blue plate mayo.

If you’ve had the pleasure of having a good Roast Beef Po Boy in New Orleans and are from elsewhere, this is the recipe for you. This along with my Parasol’s Roast Beef Po Boy Recipe are damned authentic and will scratch that itch for you….provided you can find the right bread.

This detail is of utmost importance, as the cooking of the beef, maybe even more so. The bread must be a bit larger than a traditional baguette with a crisp crust, and an almost cotton candy interior. Very hard to find outside of New Orleans, but in Michigan I have found a very sufficient substitute at Fresh Thyme markets. The French Bread there is almost a perfect substitute in my humble opinion, even though they’re a bit highfalutin, organic this and that. 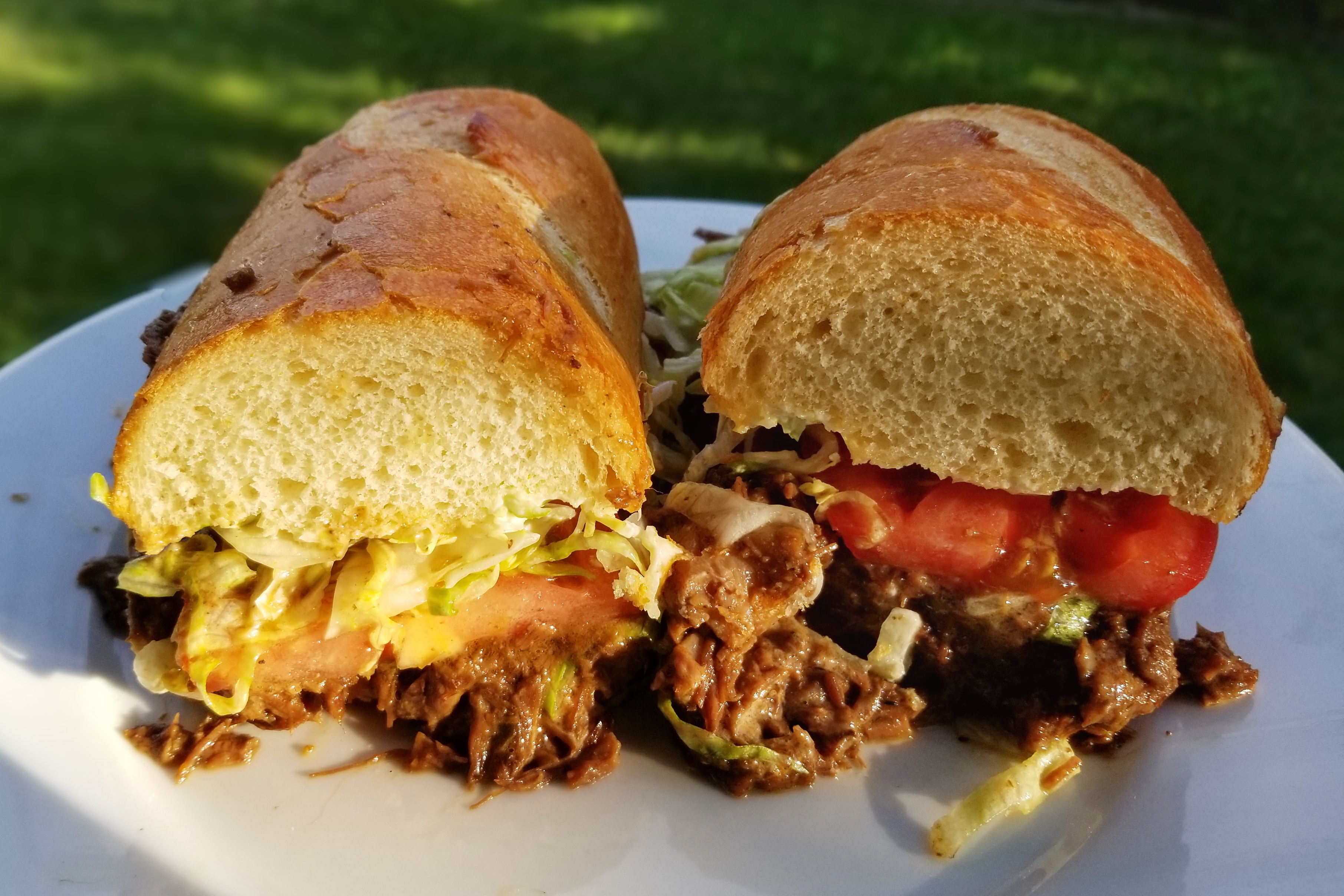 Sear the Roast liberally with all of the seasonings. If seasoning the night before omit the salt until just before searing. 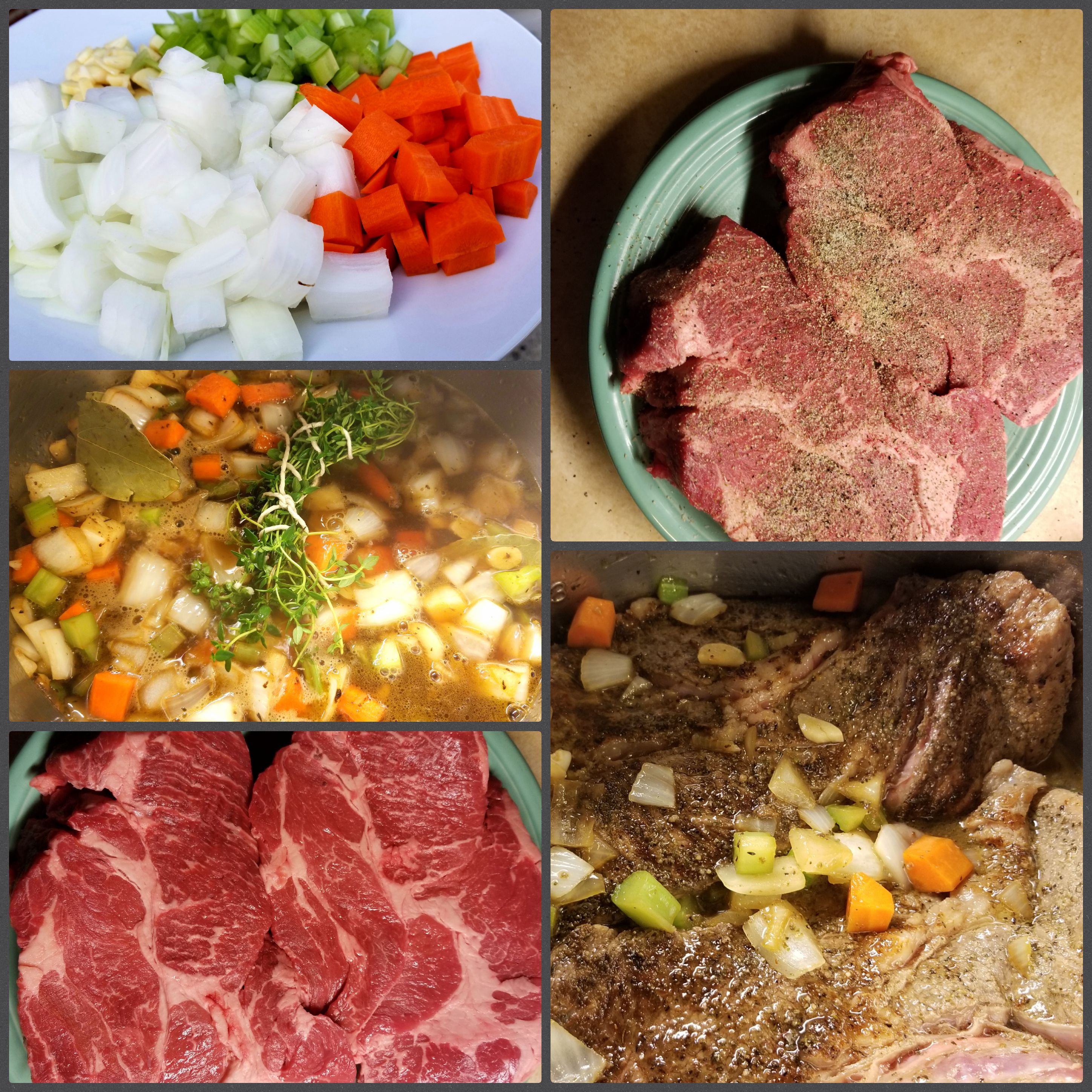 Preheat an oven to 350 degrees F.
Heat the oil in a very hot dutch oven with a tight fitting lid. Sear the seasoned Roast until very brown on all sides. Remove the roast to a plate, reduce the heat to medium, add the onions, carrot, celery, garlic, fresh thyme and bay leaves.

Deglaze the pan using the vegetables, scraping the bottom of the pan with a wooden spoon to remove all of the brown bits, the flavor. 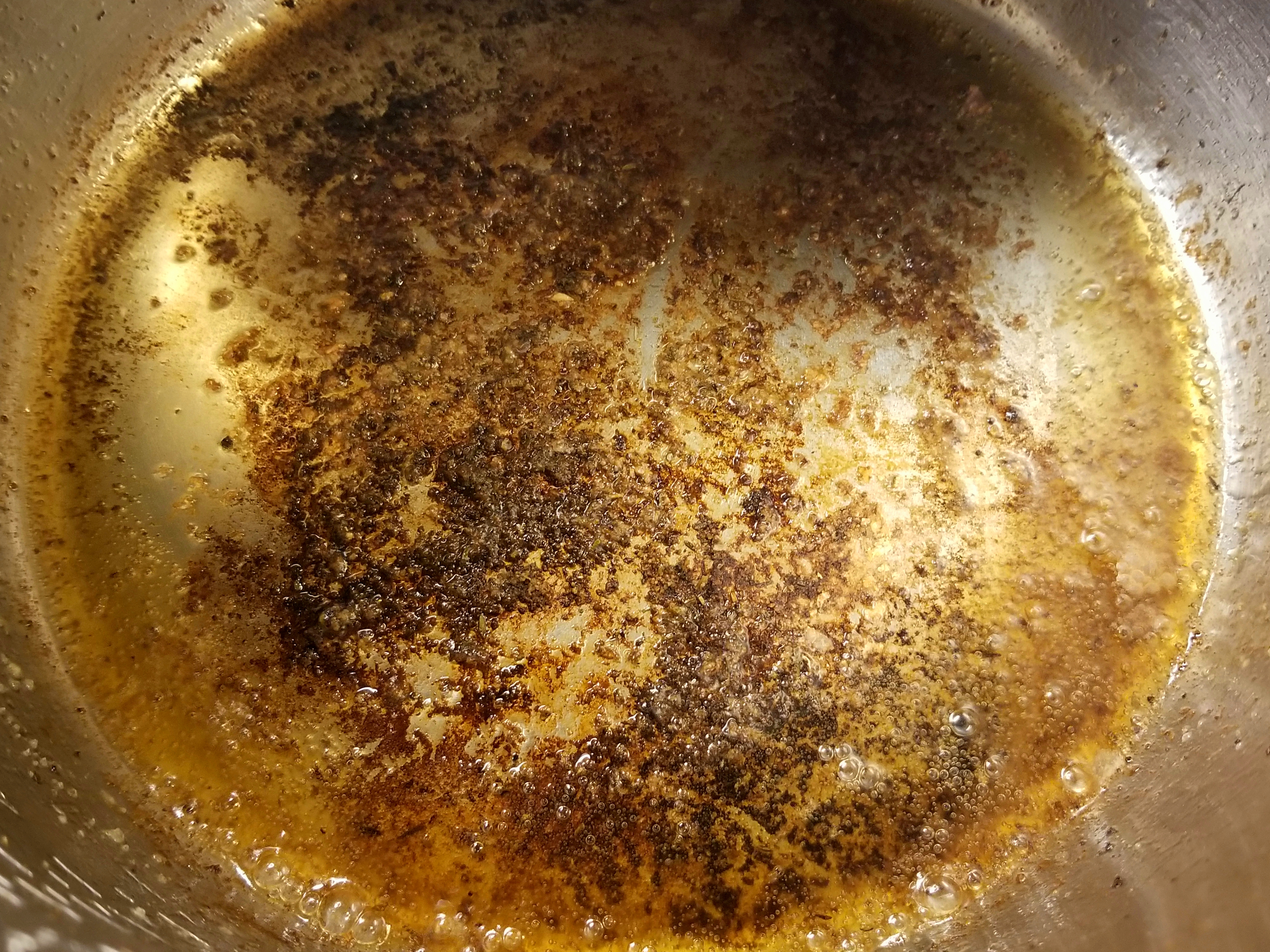 Add the beef Stock, mushroom soup and kitchen bouquet. Bring to a boil, then add the roast back to the pan, ladle some of the liquid and vegetables over the roast, place the lid on and place into the preheated oven for 3 – 3 1/2 hours.

When the roast is fall apart tender, remove from the liquid and refrigerate until easy to slice, about one hour.

In the meantime, strain the gravy, pressing some of the vegatbles through the holes of the strainer. Strain the fat from the top. Return the gravy to the pot and keep on a low flame, I like to add a tsp of garlic powder, reduce until gravy consistency, season to taste with kosher salt and black pepper.

When the roast is quite cool, “slice” but it will be more like making it fall apart. Slice the meat with a very sharp knife across the grain. Add the meat back to the gravy and heat through, check the seasoning again, keep warm on a very low flame.

For the Po Boy: 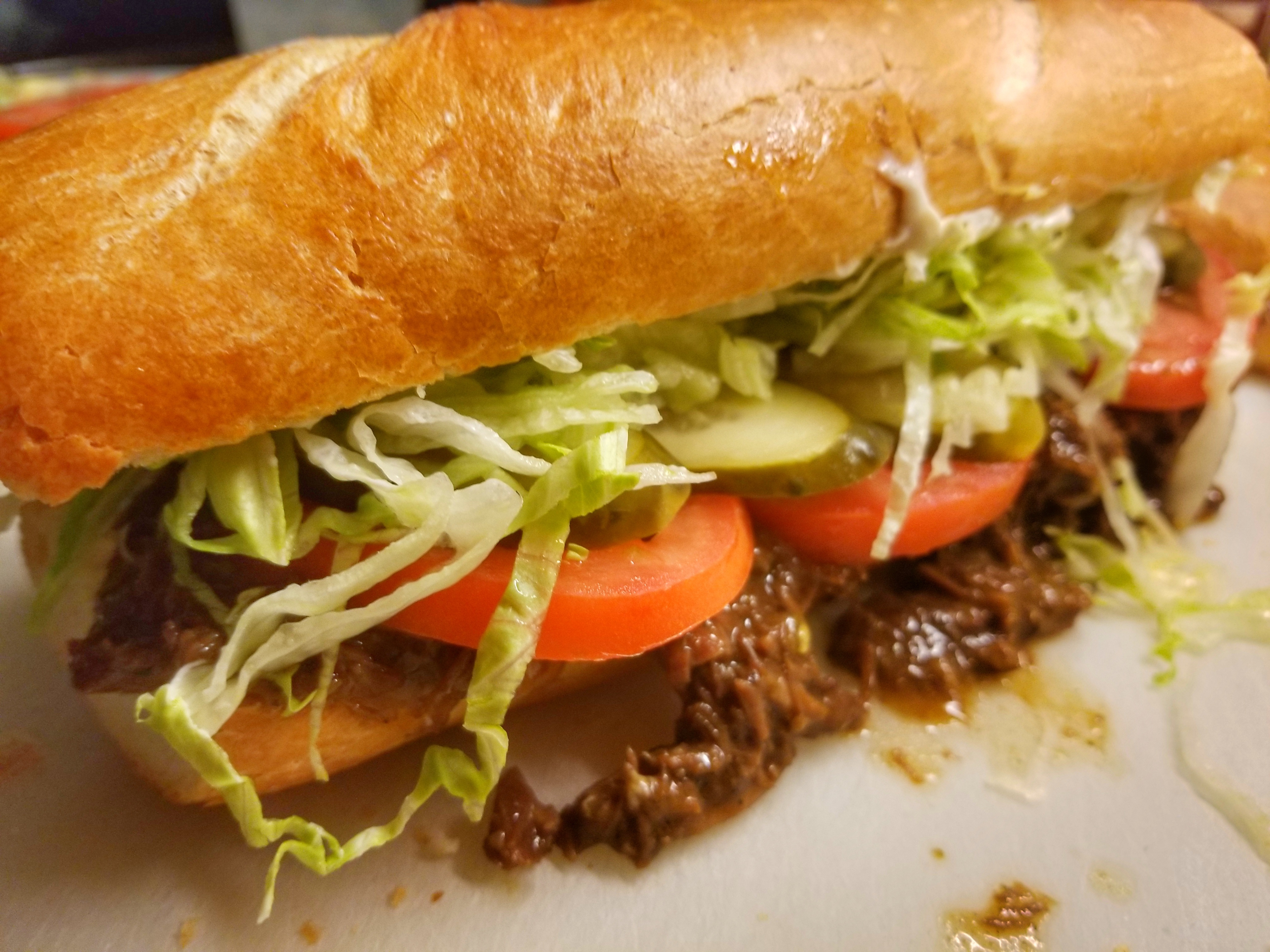 Cut the bread in half lengthwise and toast.

Slather mayonnaise on both sides of the toasted French Bread, put a generous helping of the Roast Beef mixture on the bottom half of the bun, followed by the tomatoes, then pickles, then the shredded lettuce. Put the lid on then slice in half. Serve with a cold beverage and a very large stack of napkins.

Serves 3 to 4 depending on how generous you are with the meat.

Other sandwich recipes on Nola Cuisine:

Happy Saint Patrick’s Day! The annual block party begins at Parasol’s on Constance & Third in the Irish Channel at 11:00 a.m.!! I wish I could be there.

Parasol’s Restaurant & Bar, like any respectable neighborhood restaurant in New Orleans doesn’t look like a place that you would consider eating. Drinking absolutely, eating no.

And let me say that this is one of the great drinking establishments in New Orleans, a wonderful hole in the wall bar, almost always packed with locals and whomever else happens to walk or stumble through the door.

The kind of Irish Pub with hand written signs that say things like “A 20% gratuity will be added to any credit cards left at the bar. You Drunks!!” This one made me laugh because in my past, I have to admit…guilty as charged. It’s always good to be in a town where you’re among friends.

Running parallel with the bar, on the other side of the wall is a somewhat dingy little dining room (I say that with the utmost respect and actually as a compliment), where in my humble opinion, the BEST Roast Beef Po Boy (my Parasol’s style Roast Beef Po Boy Recipe) is served. Detractors can go nuts in the comments section if you like, this is a hot debate, but Parasol’s serves the kind that I like, Roast Beef that is just obliterated from long slow cooking in a rich gravy, smothered with mayonaise, some tomatoes, pickles and lettuce; dressed that is. And that bread! Light as can be, yet chewy, with a crust that is beyond imagine!

Now the fun starts. This is also the messiest sandwich I have ever eaten, hats off. From my first bite I was awash in debris, mayo, gravy, up to my elbows. I actually ran out of napkins and had to clean myself by rolling around in a small patch of grass I found on Constance. I’m exaggerating of course, but you know what I mean, good sloppy eating in one of the most colorful little Irish bars I’ve ahd the pleasure of visiting.

Speaking of which, tomorrow being St Patrick’s Day, this is the place to be in the city, they annually host a block party that begins at 11:00 a.m. and runs all day long! Wish I was there! Here are some pics of the block party on their website.

Gaston from The New Orleans Creole and Cajun Cuisine Blog sent us this video which shows the owner of Parasol’s making their famous Roast Beef. They should have given the host a Po Boy to keep him from talking so much through the video, that clown annoys me. (**Update – Upon my second viewing of this video, I’ve concluded that this guy from the Food Network, is THE biggest stooge on TV! Larry, Moe, Curly, Shemp, and even the elusive Curly Joe, have nothing on this guy.) Thanks for the link Gaston, and keep up the great blogging! Here is the video: