As much as I love the spring Crawfish Boil, I always look forward to having some leftover Crawfish tail meat to play with for later use. After my spring boil I had a fair amount of Crawfish leftover so I sat down with a cold beer after our guests had left, relaxed and picked all of the tail meat as well as the fat from the heads.

This is one of those tasks that is actually a very therapeutic process for me, like peeling shrimp, or making roux, where you can just sit or stand there and enjoy the silence and repetition of the task at hand, let your brain go and think about whatever; kind of like sleep without the bad dreams.

Which brings me to lunch today.

The smell of Crawfish Etouffee or Shrimp Etouffee (my recipe), makes me more nostalgic for Louisiana than any other dish I can think of, even above Gumbo and Red Beans. I arrived home from work tonight to sit down and write this post and was met with the aroma of Etouffee still hanging out in the house, heavenly.

The real key to this recipe as with my Shrimp Etouffee, is the stock. Seafood stocks are simple and require a very short cooking time yielding great results.

This recipe leans a little more to the country than my Shrimp Etouffee Recipe, although they are similar, neither shy with the butter, but this one doesn’t use tomatoes. I hope you enjoy it!

Melt the butter in a large cast iron skillet, add the onions, bell pepper, celery, and 1 Tablespoon of the Creole seasoning, saute until translucent. Add the Crawfish tail meat, the remaining Creole seasoning and saute until the tails let off some of their liquid, cook for 3-5 minutes more. Add the flour, stirring constantly for about 3-5 minutes.

Add a small amount of the crawfish stock, stir well to form a paste, add the remaining stock gradually, whisking constantly. Bring to a boil, then reduce to a simmer. You may need a little more stock, but the end result should be the consistency of a gravy, not too thick, not too thin.
Add the garlic, Thyme, Worcestershire, and hot sauce, a little salt, black pepper. Simmer for 20-30 minutes.
Add the green onions and parsley, simmer for 5-10 minutes more.

Stir in the 3 Tbsp butter, lemon juice, and adjust the seasonings to taste.

Serves 4 as an Appetizer or 2 as a large entree.

Be sure and check out my ever growing Index of Creole & Cajun Recipes which provides links to all of the recipes featured on this site! 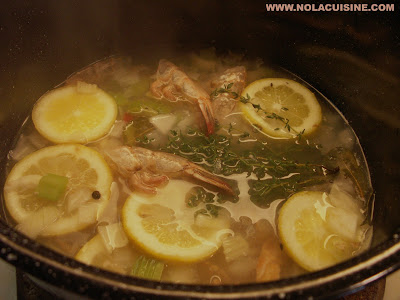 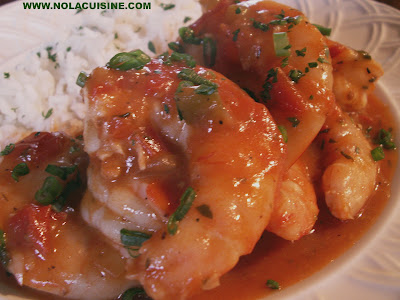 Stocks add not only a richness of flavor but also of texture when it comes to Chicken and Beef Stock. When chicken or beef stock are made well, that is, slowly cooked over a low flame for hours, they are gelatinous and rich. So rich in fact that when cooled they are the texture of Jello, let’s see Kitchen Basics or Emeril’s brand hold a candle to that. But they do take a lot of time, which brings me to why I love Shrimp Stock, because it takes no time at all, an hour tops.

I always buy shell on shrimp. Why? For the same reason I buy bone in cuts of meat. Stock. The amount of shrimp youâ€™re using for this recipe will produce enough Shrimp Stock for the shrimp recipes calling for it on this site, plus some extra to freeze for later use. Shrimp stock only needs to cook for about 45 minutes to 1 hour, once you reach the simmering point.

Add all ingredients to a dutch oven or a moderate sized stock pot. Cover this with cold water, it should be about 6-8 Cups Cups. Bring almost to a boil, reduce the heat to a low simmer. Skim off any scum that rises to the surface. Simmer for about 45 minutes to an hour. Strain through a fine mesh strainer or chinois.

Stock freezes very well. I always break it up into one use batches by putting it into those plastic ziploc containers. Just remember to leave about 1 inch of headroom as it will expand when it freezes.

Be sure and check out my ever growing, Index of Creole & Cajun Recipes, which features links to all of the recipes featured on this site!